All In-person meetings will be held at the Village Office, Atwater Plaza, 4 Gateway Drive (some meetings are still via Zoom)

Effective January 6, 2022 until further notice all Court Conferences & Arraignments will be by teleconference ONLY.
NO IN PERSON COURT SESSIONS. Call Court Office 516-482-6430 for further information.

This plaque resides in the Village Hall and was erected by order of the Board of Trustees on its 70th Anniversary in 1981. 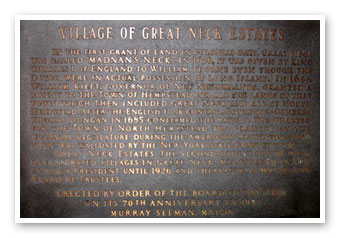 In the first grant of land in colonial days, Great Neck was called "Madnan's Neck." In 1630, it was given by King Charles I of England to William Thorne even though the Dutch were in actual possession of Long Island. In 1644, William Kieft, Governor of New Netherlands, granted a patent to the Town of Hempstead for all the lands of that town which then included Great Neck and all of North Hempstead. After the English took control, Governor-General Thomas Dongan in 1685 confirmed the patent. The charter for the Town of North Hempstead was granted by the colonial legislature during the American Revolution and then was validated by the New York State Constitution.

Great Neck Estates, the second oldest of the nine incorporated villages in Great Neck, was created in 1911. It had a President until 1926 and thereafter a Mayor and Board of Trustees.

There is a house on Hillside Avenue that is a house like no other on the Peninsula.
People have asked: Is it a castle? Was it built by an English aristocrat? If not, what is it?

The Mystery of Mirrielees
and My 17 Year-long Attempt at its Demystification
By Ilse E. Kagan, Historian of the Village of Great Neck Estates

My topic is the mystery of a how someone, other than the McKnight brothers, who were the dominant developers in the Great Neck area in the early 1900’s, managed to own and develop land in Great Neck Estates under the British name of the Mirrielees Corporation. How did Mirrielees Park with such English-named streets as Mirrielees, Ascot and Gloucester on the west side of Bayview Avenue come to be?

Read about William Gropper, noted Great Neck Estates Artist
HISTORY CORNER
Residents of Great Neck Estates have long been proud of their Frank Lloyd Wright house and the home where F. Scott Fitzgerald started writing his famous Gatsby novel. Few, however are aware of a number of houses in our midst which were built in the style of the American Craftsman Movement referred to as the “Mission Style”.
The founder of that movement was Gustav Stickley. He believed a house had to have a sturdy structure, simple, straightforward lines, woodwork of primarily Native American oak, built-in cabinets, and fireplaces. His designs were a strong contrast to the ornate, highly decorated style of the Victorian era.
In 1904 he formed the Craftsman House Builders Club and readers could order architectural plans from the magazine. However, for a short period, less than a year, his Craftsman House Building Company, itself, constructed houses mainly in New Jersey and on Long Island. It was at that time that the house at 46 Cedar Drive was built. Stickley designed the home for a friend who asked him to supervise the construction. The house came to the attention of the Great Neck Historical Society’s Heritage Recognition Program, which identifies and honors Great Neck’s most notable homes. A plaque was presented to the owners, confirming that the house was built in 1909 by Gustav Stickley.

As we commemorate this November the 75th anniversary of Kristallnacht, we are also celebrating the 75th Anniversary of the Kindertransport, the rescue by England of 10,000 children from europe following that fateful night. The celebration 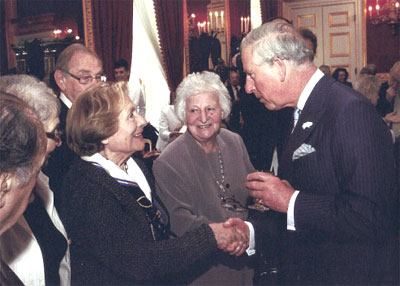 this year that took place in London, was unique. The “Kinder” including myself, received a Royal Invitation To St. James’ Palace from Prince Charles, to come to the Palace for a reception. According to the Prince, “Titbits” and wine were being served. I had none of it in my excitement of not only seeing the Prince, but actually shaking his hand and chatting with him as I stood in the Throne Room of the Palace. The ‘Kinder’ have never stopped being grateful to the British Government for their humanitarian act recognizing that it was the only country in the world that reacted so positively. After a memborable debate in Parliament in November 1938, 10,000 Visas were issued, outside the regular quotas, to allow children in danger in Germany, Austria and Czecheslovakia and Danzig to enter the country. They had to come alone, unaccompanied by parents, and, on arrival were placed in homes (If you were lucky) or hostels, farms And other gacilities. This reunion was a historic event for me which I cherished even more so as the Historian of the Village of Great Neck Estates.
Ilse Kagan